“If I had my way – and I shan’t – my Christmas Day eating and drinking would consist of an omelette and cold ham and a nice bottle of wine at lunchtime, and a smoked salmon sandwich with a glass of champagne on a tray in bed in the evening.”   From Elizabeth David’s Christmas (2003) edited by Jill Norman, p.11.

Hooray for Elizabeth David (1913-1992).  I love her for wanting to go against the grain and, in the current frenzy of Christmas preparations, the quote above is a refreshing reminder that the simple pleasures are often the best.

Elizabeth David’s Book of Mediterranean Food (1950) is often cited as the book that began to transform British cookery after the Second World War.  My Mum had a copy and I am sure we ate better because of it.   If that was the only book she wrote, it would be enough for her to qualify as a food heroine but she produced many other beautifully research books that are written in a way that makes you want to taste the food she describes.  My favourites are Summer Cooking (1955), English Bread and Yeast Cookery (1977) and The Harvest of the Cold Months: the social history of ice and ices (1994).

She knew her own mind and, although I know that she often spent Christmas with her sister’s family, I suspect that sometimes she did get her wish and retired to bed with a glass of champagne.  To find out more about her character and her rather adventurous life read Lisa Chaney’s biography Elizabeth David or the one by Artemis Cooper, Writing at the Kitchen Table.

Eliza Acton (1799-1859) wrote some excellent cook books in the mid-19th century and she has a lot of fans amongst modern chefy types.   Unfortunately she must have been publicity shy because I can’t find a picture of her.

The daughter of a brewer she was born in Battle, Sussex but grew up in Ipswich, Suffolk.  As a young woman she was sent to France for her health, where she probably had an unhappy love affair.  Certainly her book of poems, published in 1826, contained a number about unrequited love.

Her publisher suggested that instead of more poetry she ought to write something more practical.  After years of work the book she produced, Modern Cookery for Private Families, first published in 1845, was immensely popular.  She wrote for people like herself, that is to say middle class but of modest means.   Her biggest innovation was to list the ingredients needed in a recipe, something that is standard practice today.  The recipes she gives are sensible and the instructions clear.  It is no coincidence that Delia Smith wrote the forward in a recent biography of Eliza Acton.

Modern Cookery for Private Families gives recipes for all sorts of cooking and, despite Eliza’s warning of the health risks of eating too much rich food, she includes a chapter on cakes but in the introduction she vents her disapproval,

“Amongst those which have the worst effects are almond, and plum pound cakes, as they are called; all varieties of the brioche and such others as contain a large quantity of butter and eggs.   The least objectionable are simple buns, biscuits, yeast and sponge cakes, and meringues; these last being extremely light and delicate, and made of white of egg and sugar only, are really not unwholesome.”

Having earned a decent amount from her writing Eliza moved to Hampstead where she worked on her last book, The English Bread Book, which was published in 1857.  This was a more scholarly work in which she advocates making bread at home to avoid the adulterated loaves on sale.  It didn’t have the same popular appeal as her earlier work but it too has passed the test of time.  It is fairly easy to get copies of her books and they are definitely worth reading and cooking from. 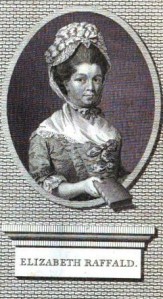 A portrait of Elizabeth Raffald printed in 1782, the year after her death.

Elizabeth Raffald (1733-1781) is a food heroine for writing The Experience English Housekeeper, a practical 18th century cookery book.  She was one of those amazing women who did everything, making the rest of us look like lazy slatterns.  And, in between all the work, Elizabeth gave birth to between 6 and 15 children (the records are vague and sources differ).

The Experienced English Housekeeper was first printed in 1769 and reprinted many times during the next 60 or so years.  The book gives recipes for all sorts of things, from Yorkshire goose pie and spun sugar webs to cherry brandy and pickled walnuts.   It also gives instructions on how to lay a table out for a party.  In the introduction, Elizabeth explains that she had worked for 15 years as a housekeeper in “great and worthy families” and the book was dedicated to her last employer Lady Elisabeth Warburton of Arley Hall, Cheshire.  It was at Arley Hall that she met John Raffald, the head gardener who became her husband.

Soon after marrying the Raffalds moved to Manchester where Elizabeth set up several businesses.  She established herself as a confectioner, supplying the newly rich of Manchester with the fancy goods they needed for entertaining in style, for example, table decorations and cakes, as well as the kind of things you’d find in a delicatessen, like potted meats, lemon preserves, mushroom ketchup and anchovies.   Realising that her customers needed servants she set up servant exchange and, in 1772, she compiled the first directory for the growing city of Manchester, which included an alphabetical list of tradesmen.

Later the Raffalds made the short move to Salford where they ran an inn called King’s Head and a coffee-house.  They had some financial difficulties but their creditors only really moved in after Elizabeth’s sudden death in 1781.  She was survived by her husband, just three of her children and, of course, her cookery book.

I am going to start with my all time favourite food heroine, Mrs Agnes Marshall (1855-1905).  This Essex girl became a cookery entrepreneur and the queen of ice-cream in late 19th century London.  Her entrepreneurial zeal would make Jamie Oliver very proud!

Mrs Agnes Marshall from her 1885 book, Ices Plain and Fancy.

Agnes Bertha Smith was born in Walthamstow.  I can’t find much about her early life but it seems that Agnes went into service, learnt how to cook and then set up a business with her husband, Alfred Marshall.  In 1883 they established the Marshall School of Cookery in Mortimer Street (around the back of BHS and John Lewis in Oxford Street).  This establishment trained professional cooks and it was also a base for an employment agency, a magazine and a place to promote the Marshall’s products.  They sold all sorts of things – baking powder, gelatin and lots of ice-cream moulds.  Ice cream was very fashionable at the time and the Marshalls made the most of it.  I particularly like her design for a shallow hand cranked ice-cream maker.  Agnes also wrote four cookery books.  One Ices Plain and Fancy, original published in 1885, was republished in 1976 so it is fairly easy to get hold of a copy.

Sadly, Agnes died at the relatively young age of 49.  She never recovered after falling off a horse.  Alfred carried on with the business but it was never quite the same without Agnes.